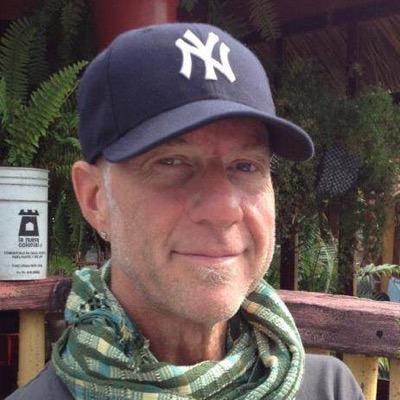 Now onto the substance of his piece. Borchers was reacting to the following statement by Coulter in an interview she did with Bloomberg on Wednesday:

“Something I didn’t know when I wrote the book, and I’m writing about it in tonight’s column: It is absolutely an outrageous, despicable, deliberate lie that the media has told about Donald Trump mocking a disabled person,” Coulter said. “He would not do that. He said he would not do that. And the proof positive of this is in the exact same speech, he did the exact same imitation of a general. And the media knew that, and they will not show us that clip. He has done the exact same imitation of Ted Cruz, flailing his arms. This is how Donald Trump does an imitation of a flustered, cowardly person or a frightened person.”

Borchers then set about to prove Coulter wrong. (He didn’t.) To prove his case, Borchers tries to demonstrate that the media did not show the video of Trump impersonating a flustered general at the very same rally he impersonated a flustered reporter because, well, Trump didn’t move his right hand in precisely the same way in both clips, so it wasn’t relevant. (Yes,  this is his defense.)

Here is Trump imitating a flustered general at the VERY SAME rally he imitated the reporter:

Although Borchers admits that both clips “involve open-mouthed hand-waving,” Borchers claims that only when Trump imitates the groveling reporter “does he curl his right hand and wrist in a way that mimics the effect of the reporter’s condition.”  To prove his point, Borchers puzzlingly posts a side by side freeze framed picture of Trump impersonating the reporter where Trump’s hand isn’t curled at all. 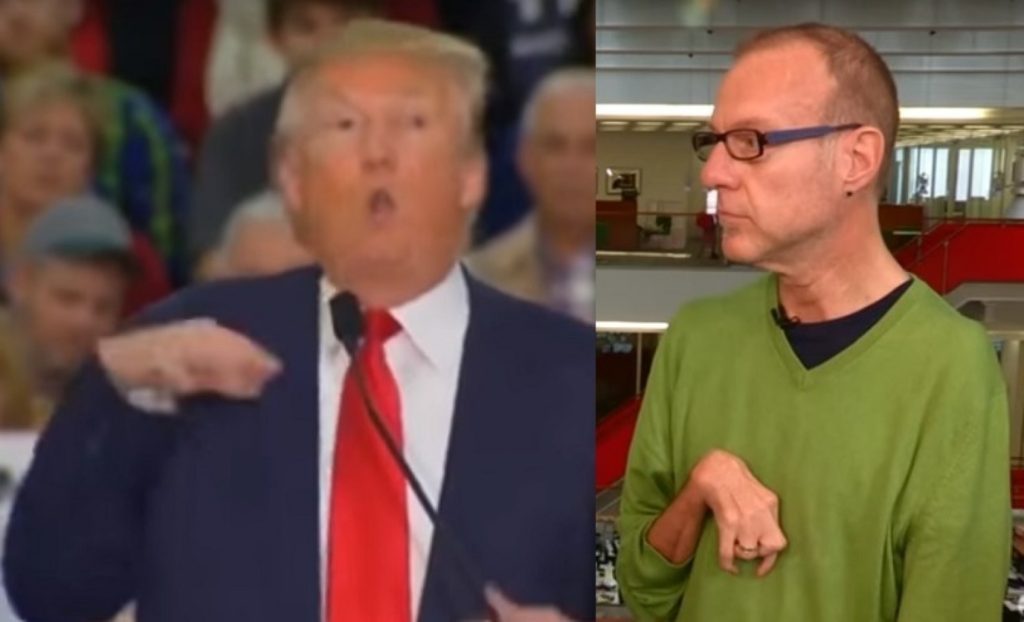 Nevermind the fact that freeze framing a microsecond of a video where Trump is flailing his arms spastically and putting it next to a shot of a perfectly still Kovaleski is fundamentally dishonest to begin with. We’ll get to that later.

…only when Trump mocks Kovaleski does he simulate involuntary spasms. Coulter and other Trump apologists have pointed out that Kovaleski does not convulse the way Trump did on the stage. To be sure, his motions are more subtle.

Please read this carefully. Borchers is here saying that although Kovaleski does not “convulse” the way Trump did on stage, Kovaleski does in fact convulse in involuntary spasms, just in a more “subtle” way. Thus what Borchers is claiming is that Trump’s imitation of a flustered backpedaling reporter here:

As Borchers lectures, “the fact that Trump’s act was exaggerated hardly proves it wasn’t a reference to Kovaleski’s arthrogryposis.” Ahh yes, how could we be so stupid! The similarities in Trump’s flustered reporter impression and Kovaleski are now plain as day to us all. In fact, after this side by side comparison who can ever again doubt that Trump simply impersonated Kovaleski with a healed moveable arm in the process of being electrocuted.

Again, to be clear, Borchers is telling us that Kovaleski has involuntary spasms in his right hand. I mean, look at Borcher’s gif file above. Certainly this proves it. Or could it be that Kovalesi does have the ability to keep his right hand still and the movements in the gif and in the video it comes from were voluntary? Now if we had picture evidence of Kovaleski being able to control his hand, it would really cast doubt on Borcher’s claim. Wait a second. I seem to remember such a photo from Borcher’s previous piece we critiqued. Ahh yes, here it is: 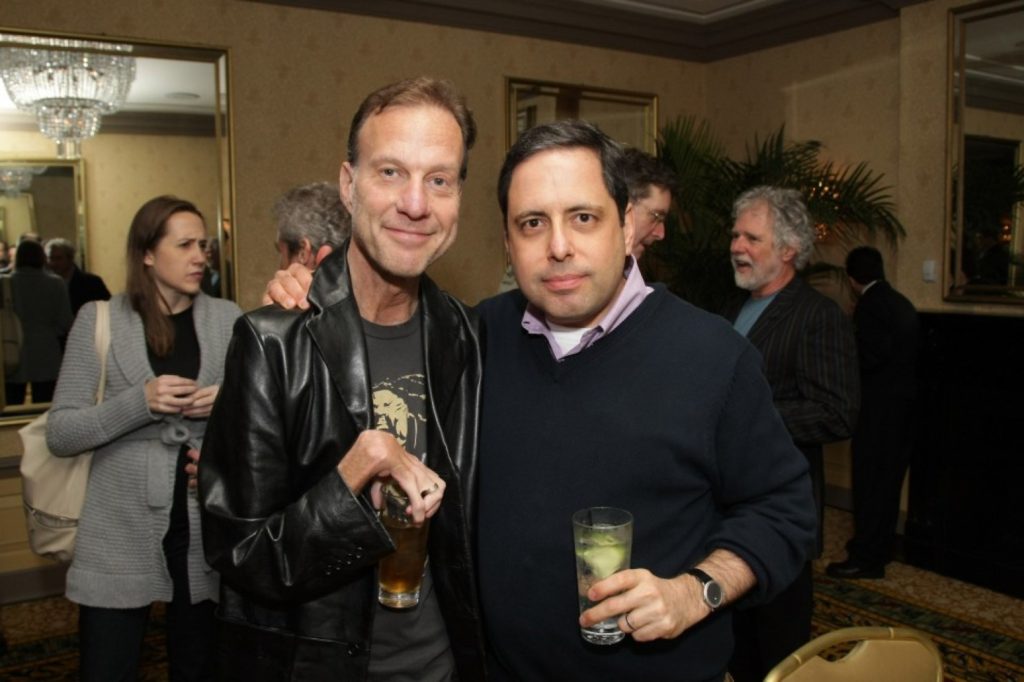 Thus, according to Borchers’ own photo, Kovaleski apparently has no problem holding a full glass of beverage by the very top using only his disabled hand.  The same hand Borchers describes as suffering from “involuntary spasms” which, he compares to a more “subtle” version of Trump’s “convulsions.”

Later, Borchers moves on to Trump’s impersonation of a flustered Cruz the media never told us about. Borchers (or someone at WaPo) made a looped gif file of it below:

Looks very similar to the flustered reporter impression does it not? In fact, looking at all three impressions one would be tempted to think this is simply the way Trump impersonates flustered people. But, who are you going to believe? WaPo? Or your own lying eyes? As Borchers explains to us:

It’s definitely closer than Trump’s impression of the general but, again, the wrist and finger contortions are missing.

There is actually no contest. In fact, the photo Borchers cites as evidence may as well have been from the GOP primary debate where Trump said he’d had it “up to here” with Ron Paul. Now if Borchers really wanted to prove Trump mocked the reporter’s disability, he should have come up with a better misleading freeze-framed screenshot than that. In fact, out of charity I will provide one to Borchers below: 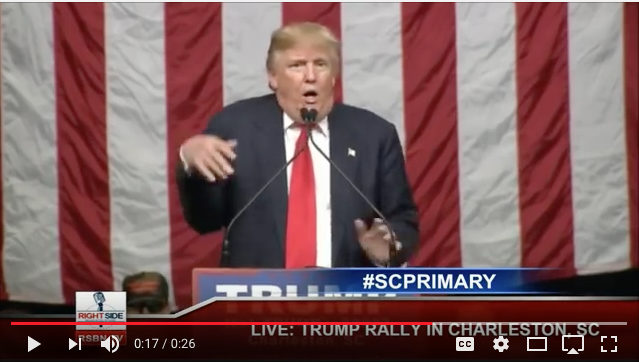 Now the photo above is priceless. Trump here is obviously curling his right hand with the perfect wrist and finger contortions in order to clearly mock Serge Kovaleski’s disability. In fact, he is even going a step further with the gaping mouth and blank stare. If Borchers had put this photo up next to a still shot of Kovaleski then his readers would have had no problem believing Trump mocked his disability.

But there is only one problem. The photo above is a freeze-framed picture, not of Trump mocking Kovaleski, but of Trump mocking Ted Cruz. Thus, one can see how easy it is for the media to have people see what they want them to see by selectively choosing freeze framed photos from a moving picture. If you don’t believe me take a look at Elizabeth Warren giving the Nazi salute at the Democratic convention below: 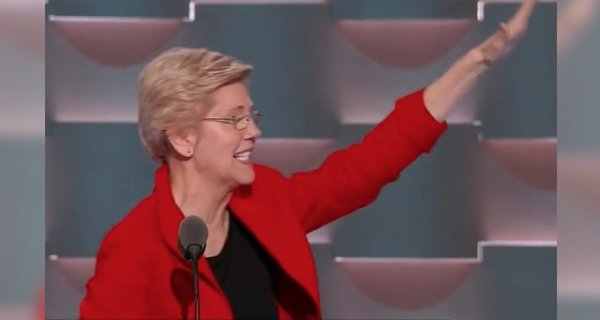 Predictably Borchers ends with yet another misleading point:

The imitations are not identical, and the one involving Cruz happened three months later, meaning journalists obviously could not have known about it when they criticized Trump for his meanness toward a colleague.

Of course, Trump’s impression of Cruz was not Coulter’s main point. Yes, if Trump had only done the same impression 3 months later, it might be suspect.  But, the primary point is that Trump did the same impression of a general in the very same speech as the flustered reporter.  Trump impersonating Cruz the same way 3 months later — after the original slander had faded — just further shows that this is how Trump impersonates a “flustered person.”

Still not convinced? What if I told you Trump did an impression of a flustered version of himself in 2005, eleven years ago? In 2005 Trump and his new bride were interviewed by Larry King. During the interview, King asks Trump if marriage will interfere with his constant working. Take a look:

Remember that although Borchers admits that the clips of Trump impersonating the general and the reporter “involve open-mouthed hand-waving,” he claims that only when Trump imitates the groveling reporter “does he curl his right hand and wrist in a way that mimics the effect of the reporter’s condition.”  Well, the clip above  from 2005 involves “open-mouthed-hand-waving,” in addition to Trump curling both his right and left wrists! Obviously, Trump is here mocking his own, heretofore unknown physical disability: 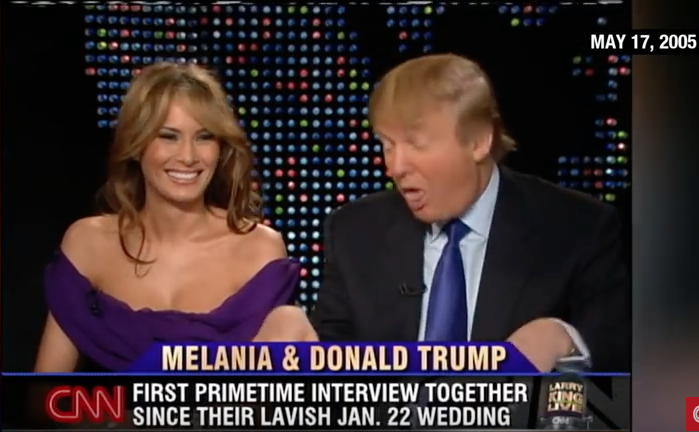 In addition, WaPo published numerous articles on this story since Trump impersonated Cruz and thus had every opportunity to show the clip to their readers as well as the clip of Trump impersonating the general. The problem is that WaPo doesn’t trust their readers with that kind of information. They are afraid they just might come to the ‘wrong” conclusions if they see all the evidence and think for themselves.

In light of all this, how fitting is it that Mr. Borchers writes a column in the WaPo section called “The Fix?” Yes, the fix is definitely in for Hillary at the Washington Post. It has been for some time.