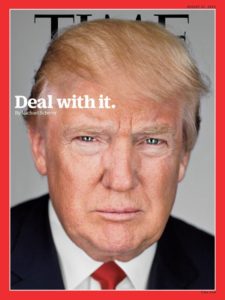 The following comes from The Deus Ex Machina Blog ~ “A blog dedicated to chronicling the ‘Restoration of all thing in Christ.'” The author, S. Armaticus, a Catholic, recently explained why he is voting for Donald Trump over Hillary Clinton. His opinion echoes elements of our own opinion expressed on The Remnant not too long ago:

Donald Trump is a salesman, a businessman, and a competitor. He is old school, tough, blunt. But most importantly, he deals firmly in reality. Because to get results in business you have to deal in reality or you go bankrupt. I believe this key fact is a huge one for Catholics. The very philsophical foundation of our Faith  is recognizing that there is an objective reality and conforming our thought to be in accord with it.

In contrast, all liberals, especially Hillary Clinton, live in a world of ideology completely unmoored from reality. This is inherently dangerous… When leaders start trying to conform society to principles against reality you end up with totalitarianism because you need the force of the state to try to continually change a reality that will not change…

Although Trump does not have a 100% Catholic platform, and would never be elected in our society if he did, the one thing he has is common sense. He does what works to get tangible results. With a man who operates based on reality, on what works, on the practical, one can have a conversation. With a progressive ideologue, there is no conversation. Because that person rejects all of the reality based premises you are starting from. They work off of the false premises that white people are all oppressors and have “privelege”, all men are sexists, there are no differences between genders, gender is a social construct, following one’s religious teachings upholding the natural law is discriminatory and prejudiced. There is no compromise with such an individual because they are living in an unreal world of their own construction.

S. Amarticus echoes these sentiments by pointing out that Trump has a rational decision making process and is too big to be bought. This is important as the alternative, Hillary Clinton is motivated at best by her ideology (which is at odds with reality) or worse, motivated by selling her influence to the highest bidder.  I encourage you to read his piece in full here:

Donald J. Trump: Endorsement For The Office Of The President Of The United States Of America

Other articles related to Donald Trump are on his website as well. He tries to approach problems by applying “classical Catholicism with a Thomas undercurrent.” Thus he has a unique Catholic approach for our times that is worth a read.

Here are some highlights from his Trump endorsement:

From what I have observed, Donald Trump is a man similar to Silvio Berlusconi in many respects. He is very successful and independently wealthy, whose motivation appears to be higher than just the next $1m that he will make. It also appears to me that what is motivating Mr. Trump is that he wants to restructure the US government in a similar manner in which he restructured some of the businesses that he took over and brought back to profitability.

On a higher level, what I see in Donald Trump is man with a RATIONAL decision making process. His decision making process is inherently based on a cost and benefit paradigm. Just yesterday he made a statement that he would not automatically defend any NATO member country. That is, he would not automatically defend that country until he established: “only if that country fulfilled its obligation to us”. In other words, that country had military spending at the 2%+ of their Gross Domestic Product. Only 3 NATO members presently meet that criteria. This is RATIONAL and a much greater deterrent to any potential aggressor than the status quo.

And lastly, on to the even larger issue about what is motivating Mr. Trump to run for the White House. In a post that appeared at the Zero Hedge website (see here), a close friend of Mr. Trump, one Mr. Thomas Barrack published a 12-page treatiese on the economy, at the same time giving an insight into the thinking of Mr. Donald J. Trump. Here is how the leftist new organization Bloomberg set up the piece:

The paper is in no way an official statement from the Trump campaign; it reflects only Barrack’s personal views. But Trump, a real-estate developer and reality-TV star with no experience in public service, relies on friends and family for advice more than many politicians do. Barrack is scheduled to speak at the Republican convention in Cleveland this week where Trump will be officially named the party’s nominee.

And the reason that understanding of the above is of critical importance is as follows:

The world is moving at warp speed, as are all the things within it. In order to keep up, we too need to move and adapt or be lost in the black hole of entrenchment and entitlement. Many decades ago, Winston Churchill wrote a series of essays predicting the ever more dizzying pace of change in the modern world. It could not and must not be stopped, but he worried that mankind might have so much more, yet be unhappier than before. “Their hearts will ache, their lives will be barren, if they have not a vision above material things,” he wrote.We need to be reminded about the “simple questions which man has asked since the earliest dawn of reason,” about the meaning, purpose, and ends of mankind – in other words, the same kind of questions that led America’s Founders to declare the self-evident truth that all human beings are created equal. As we question the status quo and chip away at the corrosion that attends old thoughts, ideas, and institutions, we must not fail to keep in mind the difference between material things that are always changing and the abiding truths that have made America great.

What more can one expect from a businessman in this day and age. Yet the NORMALIZATION process has started…

The reason that the Deus Ex Machina endorses Mr. Donald J. Trump for the Presidency of the United States of America is primarily due to the fact that Mr. Trump has been and is a very successful businessman. The reason that Mr. Trump is a very successful businessman is that he has formed a RATIONAL thought and decision making process. This RATIONAL decision making process is the antithesis of an IDEOLOGY (see here)since it MUST be POSITIVISTIC in nature (see here). In other words, it conforms to the laws of nature irrespective of whether Mr. Trump personally agrees with the outcomes or not.

Furthermore, Mr. Trump wants to be a successful President because he has what is euphemistically termed “skin in the game”. Mr. Trump’s businesses cater to real people. What I mean by this is that if Mr. Trump is successful as POTUS, the US economy will rebound and in turn his companies will be more successful  in the process. Not because he will be able to steer contracts to them, but because if the US economy recovers, as we all know, a rising tide lifts all boats. Therefore there is a proper principal/agent relationship (see here) in place whereby, and if for no other reason, the more successful Mr. Trump is as POTUS, the more money his business interests will make.

But this is not to say that Mr. Trump is solely driven by economic motivations. We can discern this not only by Mr. Barrack’s testimony but also by reflecting on the Republican Party platform that was formed in large part with Mr. Trump’s backing. As our friends at the Conservative Tribune, and not only them, noted: While that certainly is still a possibility, it is looking increasingly unlikely, as the Republican Party just passed what is being called the “most conservative platform” in GOP history. (see here)

Now, this is not to say that Mr. Trump will abide by this platform. But what your humble blogger will say is this:

If there is a candidate for political office or politician anywhere in the Continental United States of America or its territories who is better placed to exectute this platform, that person is Donald J. Trump. And the reasons are those stated above.

Therefore, it is with the highest recommendations that your lowly humble blogger and the Deus Ex Machina Blog endorse

Mr. Donald J. Trump for the office of the President of the United States of America.

Hillary’s Myth: A Gender Pay Gap Based on Discrimination