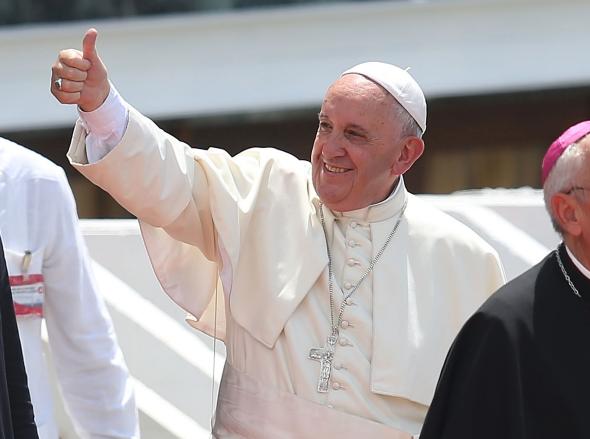 The reaction to Catholics 4 Trump from the left has been humorous as well as ironic. The one complaint we hear most often from non-Catholic liberals is that, “You Catholics must listen to your pope! He said Trump was not a Christian and you can’t vote for him.” First, progressive “separation of Church and state” non-Catholics lecturing Catholics that they must listen to a pope tell them how to vote is rich.  Second, approximately zero of these people actually read what Pope Francis said on the matter, much less the later clarification from Fr. Lombardi at the Vatican Press Office.

Indeed, the most depressing thing we have found since starting this effort is the amazing amount of US Citizens who get their voting information from headlines and shallow media hit pieces. In fact, we are willing to bet that a large number of leftists and nevertrumps will simply read the headline of this article and then immediately point out the same tired claims we stated above. Because of this sad state of affairs, we found it necessary to clarify this matter to put to rest, once and for all, the confusion willingly aided by a complicit dishonest media.

First,  journalist Philip Pullella, who has had articles printed in the ultra left wing National Catholic Reporter, posed a horribly biased and inaccurate question to Pope Francis. He was no doubt hoping to get a pull quote from the pontiff he could use to condemn Trump in a headline, which is exact what he did. Pullella asked the following during the Pope’s plane flight from Juarez Mexico to Rome:

Phil Pullella, Reuters: Today, you spoke very eloquently about the problems of immigration. On the other side of the border, there is a very tough electoral battle. One of the candidates for the White House, Republican Donald Trump, in an interview recently said that you are a political man and he even said that you are a pawn, an instrument of the Mexican government for migration politics. Trump said that if he’s elected, he wants to build 2,500 kilometers of wall along the border. He wants to deport 11 million illegal immigrants, separating families, etcetera. I would like to ask you, what do you think of these accusations against you and if a North American Catholic can vote for a person like this?

Did Trump call Pope Francis a “pawn” before this question was asked on February 18th? No. That was a word, used by Pullella, not Trump, in order to get a reaction from the Pope. Shouldn’t journalists use exact quotes if they mention a politician by name and are asking the Pope to respond to specific comments that politician made? Not if you’re Phil Pullella and you are fishing for a specific answer.

Pullella was referring to an interview Trump gave to the Fox Business about a week before. In the interview, Stuart Varney asks Trump an on the spot quick question as to his thoughts on the Pope “standing with the migrants” by holding a Mass on the border. The exchange literally lasts only 27 seconds starting at 1:41:

Trump said the following, ““I think that the pope is a very political person. I don’t think he understands the danger of the open border that we have with Mexico. I think Mexico got him to do it because they want to keep the border just the way it is. They’re making a fortune, and we’re losing.”

Yes folks, that’s all Trump said! Literally 27 seconds off the top of his head response to a question by Stuart Varney. From Trump’s point of view, the Pope was acting politically regarding the border. In fact, it is hard to blame Trump as the Pope’s original wish was to come into the United States through the border with Mexico on his US trip, but it was not logistically possible. Immigration is more a political issue than a religious one, because a nation has a natural right to protect its own borders. This principle has been accepted from the dawn of time and almost every populated city in early history built walls to protect its citizens from invaders. In fact, as has been pointed out, even the Vatican has walls surrounding it.

Thus, a nation’s immigration policy is a political issue on which there is room for Catholics to disagree. It is not a purely clear cut religious issue or a moral issue as nobody has a moral right to break the immigration laws of another nation and no nation is required not to have immigration laws or not to enforce them. In any case, Trump has never advocated (not once) ending all migration to the United States. In contrast, he has repeatedly said that he wants people to come to the US but he wants them to come in legally.

Far from trying to insult the Pope in this interview, Trump was trying to give him the benefit of the doubt. Trump was offering a possible excuse as to why the Pope doesn’t understand the issue from the American point of view; that Mexican officials may have told him only one side of the story. The previous summer in 2015, even the New York Times admits:

Despite their differences, Mr. Trump said at the time that he did respect the pope.

Next, Pullella is flagrantly dishonest in saying that Trump wants to separate families through deportation. Trump had made clear in August of 2015, almost six months earlier, that his plan would not separate families. Thus, Pullella flat out misrepresented Trump’s position to the Pope.

Pullella then says, “I would like to ask you, what do you think of these accusations against you and if a North American Catholic can vote for a person like this?” Note that Pullella apparently thinks all North Americans can vote for the United States President. Is this an insight into Pullella’s mind that he thinks there should be no borders or citizenship requirements at all?

The Pope responded as follows:

Pope Francis: Thank God he said I was a politician because Aristotle defined the human person as ‘animal politicus.’ At least I am a human person. As to whether I am a pawn, well, maybe, I don’t know. I’ll leave that up to your judgment and that of the people. And then, a person who thinks only about building walls, wherever they may be, and not building bridges, is not Christian. This is not in the Gospel. As far as what you said about whether I would advise to vote or not to vote, I am not going to get involved in that. I say only that this man is not Christian if he has said things like that. We must see if he said things in that way and in this I give the benefit of the doubt.

First, note well that Trump does not think “only about building walls…and not building bridges.” As stated previously, Trump is in favor of the “bridge” of immigrants coming into the US through a legal process where they can be vetted. The wall is a necessary component of this process. In fact, Trump has described having a “big beautiful door” in the wall so people can come here legally. This is the bridge. He says it constantly at his campaign rallies. See for yourself:

As the Pope told Pullella, “We must see if he said things in that way and in this I give the benefit of the doubt.” And there you go. Trump definitely did not “say things in that way.” That is, the way Pullella flagrantly misrepresented his positions and statements. Thus, the Pope obviously considers Donald Trump a Christian by any objective standard.

In addition, note well that the Pope could not be more clear in saying that he was not telling American Catholics how to vote at all, much less forbidding them to vote for Trump. Instead he said, “As far as what you said about whether I would advise to vote or not to vote, I am not going to get involved in that.” Thus, it is clear that as far as the Pope is concerned, any American Catholic is free to vote for Trump.

As if this weren’t enough to debunk the wild-eyed claims of left-wingers who only read headlines on MSNBC, Washington Post, and HuffPo on this issue, the Vatican even went step further and clarified the Pope’s statements the very next day!

The Rev. Federico Lombardi sought to clarify the issue Friday, telling Vatican Radio that Francis’ comments were “in no way a personal attack nor an indication on how to vote.”

Zmirak: “Christians Would Be in a Fight for Civil Survival” Under Clinton Presidency