The following comes from a behavioral scientist PhD reader who makes the following observation:

…I thought you might share my concern about a questionable coincidence I have observed in Jessica Leeds’s recent sexual abuse accusation against Donald Trump, and a statement Senator Tim Kaine made in the vice presidential debate. In the debate, Senator Kaine, in referring to the Trump Foundation, calls it “an octopus-like organization with tentacles all over the world.” In a recent interview, Ms. Leeds, in describing the alleged sexual assault on her by Mr. Trump, states: “All of a sudden, his hands were all over me. He started encroaching on my space, and I hesitate to use this expression, but I’m going to, and that is, he was like an octopus. It was like he had six arms. He was all over the place.”

The similarities in word choice and phraseology seem more than coincidental. Did Ms. Leeds watch the vice presidential debate and innocently borrow the phraseology from Senator Kaine? Or was she professionally coached to speak that way?

I recently viewed two short videos which, when compared to each other, further illustrate the comparison. First, Senator Kaine during the vice presidential debate:

This only adds to the evidence of the obvious fact that all of these last minute accusers are astro-turf plants of the Hillary Clinton campaign. For forty years Donald Trump has been in the public eye and surrounded by beautiful women with not one accusation of inappropriate behavior. Now, one month before the election, women with non-credible stories are coming out of the woodwork with Hillary’s press (proven to be in collusion with her via Wiki Leaks) dutifully reporting each and every debunked and paper thin accusation against him in order to smear his name. Meanwhile, Bill Clinton’s accusers, including Juanita Broderick who convincingly tells of how Bill Clinton raped her, are mocked and derided by the press if they are even mentioned at all.

We at C4T knew the fix was in when Anderson Cooper badgered Trump to state he never assaulted any women in the last debate “for the record.” Once Trump says “I have not” Cooper has what he was looking for and goes quiet:

COOPER: So, for the record, you’re saying you never did that?

TRUMP: I’ve said things that, frankly, you hear these things I said. And I was embarrassed by it. But I have tremendous respect for women.

COOPER: Have you ever done those things?

TRUMP: And women have respect for me. And I will tell you: No, I have not.

It was apparent that Cooper was trying to get him on record to set him up. Now we know why. For this question of Cooper’s and answer by Trump is the very reason the accusers are now citing for being triggered and “coming forward.” Not 30 years ago. Not after the Billy Bush tape was released, mind you. But only after Cooper’s question at the second debate. Slate states:

As BuzzFeed‘s Mark Schoofs pointed out Wednesday night, three of the women who’ve just come forward with stories of being groped or kissed by Trump without their consent cited this exact moment in describing their decision to speak publicly.

Thus, it is obvious to everyone with eyes to see that Cooper had colluded with the Clinton campaign to make certain that question was asked and answered at the debate. They knew it was the false premise they needed to then spring the cavalcade of fake victims they had in waiting. Recent WikiLeaks releases leave no doubt that such a scenario is not only possible, but also likely. 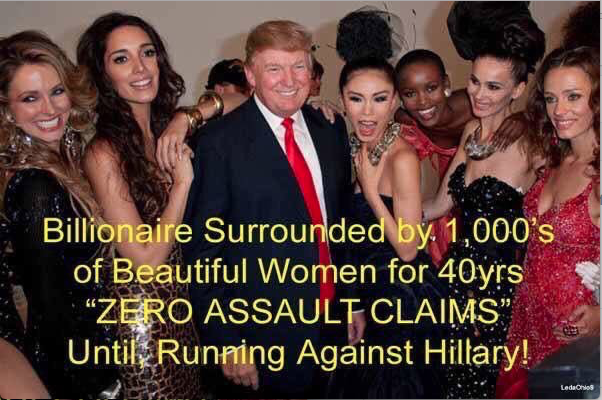 In the end, dear readers, please ignore these fake sideshow astroturf distractions and keep your eye on the ball. WikiLeaks is proving just how far Hillary’s corruption goes and how her campaign staff is riddled with anti-Catholic, pro-abortion, anti-religious liberty bigots.

In the end this is not about Trump. It is bigger than Trump. It is about US, our children, our faith and the unborn. Don’t miss the opportunity to protect all of these by voting Donald Trump and against Crooked Hillary on November 8th.