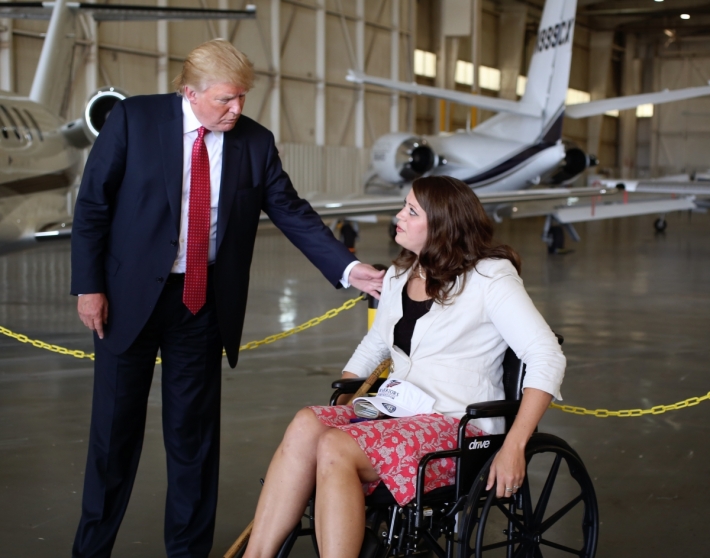 I am the creator of BOTH videos that exonerate Trump. They are on one of my youtube channels seen here to which I hope you subscribe. https://www.youtube.com/channel/UCs9cOi4zxmmn4E2YkoyfYgw/videos?flow=grid&view=0&sort=p

We created these videos back in November to dispel the lies, fraud and dishonest propagandizing of the issue by both the mainstream media and opponents of Trump including the hapless #NeverTrump klan.

As any clear thinking individual who’s watched the video can see, this was a case of manufactured outrage. However, it has become more important in recent days as the Clinton camp has sought to make Trumps supposedly ‘mimicking’ or a disabled reporter the centerpiece of her campaign on why Donald Trump is not fit for office.

She mentioned this in her acceptance speech in Philadelphia at the Democratic Convention and everyone knew what she was talking about. Or, at least they thought they knew.

What’s been bizarre to me is how many people still refuse to believe the truth, even after seeing the video. These are people so blinded by ideology and or pure hatred, they they won’t even believe their own ‘lying eyes.’

I want to personally thank you for your exegesis on this subject. It is very timely considering the Clinton Strategy and one of the most exhaustive breakdowns I’ve seen.

To those people who refuse to accept reality, the question still remains –

Why did the mainstream media never show actual video footage of the target of Trump’s mocking.

Isn’t that a reasonable request. We know everyone has heard the story a million times and saw the dishonestly photoshopped side-by-side photo strategically selected to deceive as many people as possible.

But why not video? That’s the only question to ask people who still inexplicably doubt that they were tricked by the media.

As for how to explain what happened, here is the best we’ve come up with –

“Donald Trump does an impression of Mick Jagger.

Liberals find a guy who moves like Tony Bennett and say…
..You’re MOCKING him!”

We have read so many wild explanations for how this video does not exonerate Trump, we’ve created a Top Ten List of Excuses which you can see at the top of our comments section. It would be hilarious if it wasn’t so bizarrely disconnected to reality.

C4T Note: Couldn’t resist reposting some of the top 10 list:

6) You only showed Serge from the neck up

1) The Top Answer liberals give for why we should believe them – “Because Conservatives are Poopy!”

This entire episode is illustrative of that biblical notion that some people would rather chose to believe a lie. I see a few of those people have chosen to comment here was well. Always mind-blowing.

I want to thank you again for putting this out there and hope you will join me in spreading the truth far and wide.

It can absolutely sway this election.

Many people, myself included, would have a very different view of Donald Trump if, in fact, he had mimicked a man’s congenital disability.

The truth is, however, that he did not.

NOTE: You can reach me by commenting on either of these two videos –

UPDATED on 7/31 – Angie Grover just released a new video that puts it all together. Check it out.