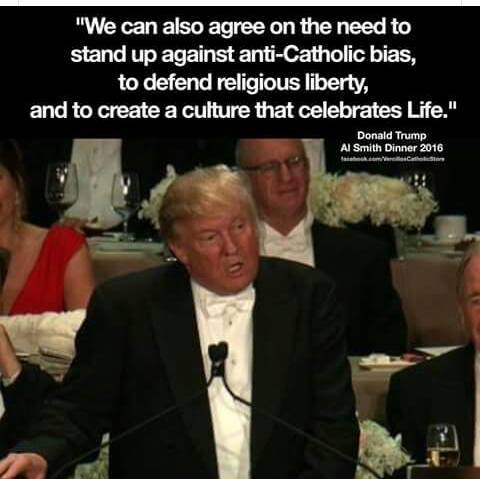 Donald Trump fearlessly took on the Republican establishment and the mainstream media. Let’s not forget that the campaign trail and the debate stage was “home turf” for professional politicians like Rick Perry, Chris Christie, John Kasich, Marco Rubio, and Jeb Bush. As a private citizen, Trump was completely in uncharted waters.

Americans often tell pundits and pollsters that they are tired of lifer politicians and the broken system of politics as usual. Once in a while a businessman, such as Ross Perot or Herman Cain, makes a serious bid for the highest office in the land. What’s interesting, however, is just how unforgiving voters can be when the non-politician they’ve supposedly longed for looks…well…unpolitical.

It takes courage to beat 16 others at their own game. It takes courage for a 69 year old man who has success in his personal area of expertise (business) to then step out into the unknown, onto the electoral stage of national politics. This is the political equivalent of Michael Jordan retiring from a professional basketball career to try his luck at Major League Baseball. It’s the Hall of Famer courageously risking failure on the grandest of scales.

Trump entered the arena 16 months ago understanding full well the ugliness of politics. For those who play Monday morning quarterback to his debate performances and campaign tactics, it might serve us well to revisit the famous words of President Teddy Roosevelt:

“It is not the critic who counts; not the man who points out how the strong man stumbles, or where the doer of deeds could have done them better. The credit belongs to the man who is actually in the arena, whose face is marred by dust and sweat and blood; who strives valiantly; who errs, who comes short again and again, because there is no effort without error and shortcoming; but who does actually strive to do the deeds; who knows great enthusiasms, the great devotions; who spends himself in a worthy cause; who at the best knows in the end the triumph of high achievement, and who at the worst, if he fails, at least fails while daring greatly, so that his place shall never be with those cold and timid souls who neither know victory nor defeat.”

For Catholics, Trump’s courage was also on full display recently at the 71st Al Smith Dinner.

While bishops and archbishops have spent decades cozying up to pro-abortion Democrat candidates, the non-Catholic Donald Trump walked into a room full of big money, liberal New York, Catholic donors and called them out. With Hillary Clinton and Cardinal Timothy Dolan only a few feet away, he said:

“We can also agree on the need to stand up to anti-Catholic bias, to defend religious liberty, and to create a culture that celebrates Life.”

With these words Trump did more to confront and condemn the unacceptable policies of Hillary Clinton (to her face no less) than Cdl. Dolan has ever done publicly. This is courage and we need to acknowledge it for what it is.

Let us hope that in the closing days of the campaign more Americans recognize the extraordinary courage exhibited by candidate Trump. May the voters equally respond with the courage to reject the status quo candidacy of Hillary Clinton and to choose instead to Make America Great Again.